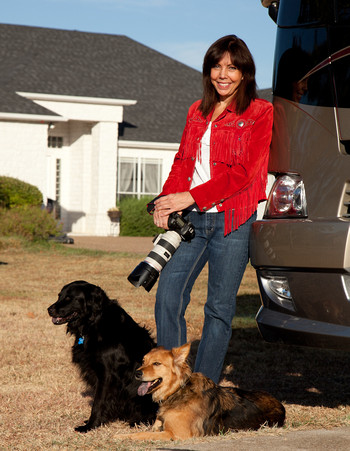 Fran Reisner, a national award winning photographer, has a passion for capturing the beauty of this world in her images. After earning her BA degree in Commercial Photography from Brooks Institute located in Santa Barbara California in 1985, Fran operated a successful photography business in the San Francisco Bay area for a number of years. When life took her to Texas in 1997, she reastablished herself in what would become a highly acclaimed portrait/wedding studio in the Dallas area. There she is best known for the innovative style of her imagery, bringing out a sense of warmth and sensitivity in her portraits, creating storytelling images… always delightful to the eye, as well as the heart and soul.
As a means of staying true to her art, Fran nurtures her passion with a periodic “journey of discovery”. In the fall of 2006 her journey led her to Italy, where she captured the grace and beauty of this country in evocative studies of light and shadow. A number of these images can be found in her first book, A Personal Renaissance, a limited edition, self published coffee table book. Her second book, The Dogs of Central Park, published by Rizzoli Universe, was released in the spring of 2011 to rave reviews. Fran dedicated this book to “all those who give so selflessly of their time and efforts on behalf of the millions of helpless animals around the globe,” and donates part of the proceeds from every book purchased directly through her to animal rescue organizations.
Fran’s journeys have taken her to many foreign places, but recently she has been wandering closer to home. Home being all over the US. With a few precise destinations in mind she meanders from one to the next with her dogs, Jazzy and Sadie, discovering and photographing the amazing diversity and beauty of our country. While traveling she is working on more books in her dog series, including The Mountain Dogs of Colorado.
Fran has been honored with her Photographic Master and Craftsman degrees, has won numerous national and international awards for her work, has been awarded three times as Dallas Photographer of the Year, and was chosen by Canon as one of their elite “Explorers of Light”. She is an international speaker, has been published in more than 30 books and magazines and has been featured on both Good Day Dallas and Good Morning Texas.
© Fran Reisner Photography
Powered by ZENFOLIO User Agreement
Cancel
Continue